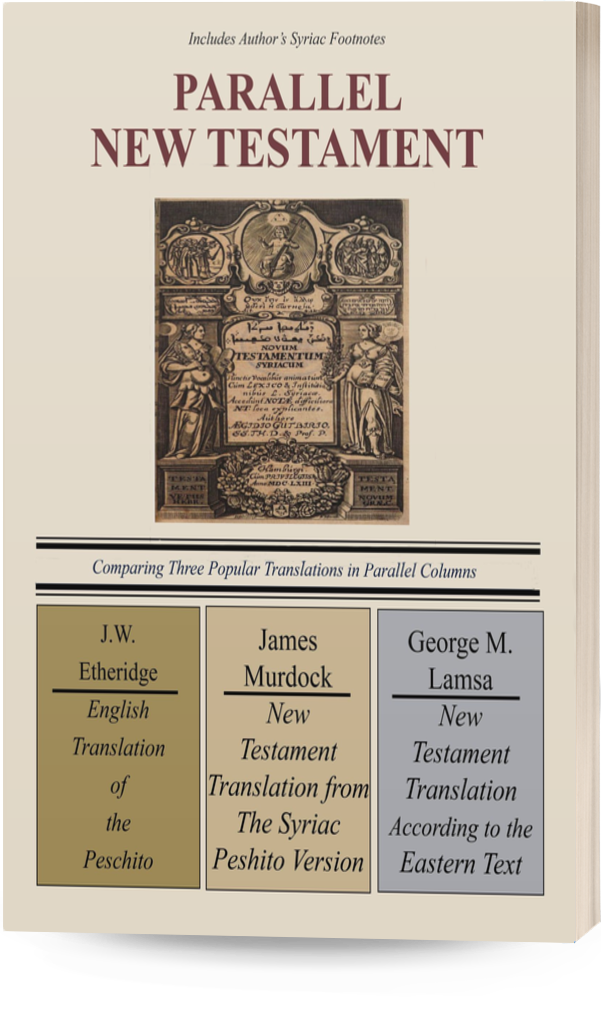 The Syriac Bible has a long and notable history. It's origins (both the Syriac Old and New Testament) are cloaked in obscurity. Unveil the truth today!

John Wesley Etheridge (Feb 24, 1804- May 24, 1866), an English Methodist, a Wesleyan minister and nonconformist divine, was born to John and Alley (Gray) Etheridge in Youngwoods near Newport, in the Isle of Wight, on the 24th of February 1804.

He was the third of seven children. He received most of his early education from his father who was master of an academy of Portsea. Though he never attended any university he acquired ultimately a thorough knowledge of Greek, Latin, Hebrew, Syriac, French and German. In 1824 he was placed on the Wesleyan Methodist plan as a local preacher.

In 1827 his offer to enter the ministry was accepted, and after the usual probationary trial he was received into full connexion at the conference of 1831. He married Eliza Middleton in that same year. For two years after this he remained at Brighton, and in 1833 he removed to Cornwall, being stationed successively at the Truro and Falmouth circuits. From Falmouth he removed to Darlaston, where in 1838 his health gave way.

For a good many years he was a supernumerary, and lived for a while at Caen and Paris, where in the public libraries he found great facilities for prosecuting his favorite subject which was Oriental studies. His health having considerably improved, he became, in 1843, pastor of the Methodist church at Boulogne. He returned to England in 1847, and was appointed successively to the circuits of Islington, Bristol, Leeds, Penzance, Penryn, Truro and St Austell in east Cornwall. Shortly after his return to England he received the degree of Ph.D. from the university of Heidelberg. He was a patient, modest, hard-working and accurate scholar.

James Murdock (Feb 16, 1776 - Aug 10, 1856) was born, Feb. 16th, 1776 at Westbrook, Connecticut. He was son of Protestant Scotch-Irish descent. He was an orphan from the age of fourteen months, till the age of fifteen, when his uncle, Rev. Jonathan Murdock helped him prepare to entered college.

He was admitted to Yale College in 1793, at the age of seventeen and graduated in 1797. He won the Berkeleian Premium, which was given to the best scholar in the class, and to the one whose exams in Latin and Greek are exemplary. After graduation, he became Preceptor of the Hopkins Grammar School in New Haven, Connecticut. In 1799, he took charge, for one year, of Hamilton Oneida Academy, now Hamilton College, at Clinton, New York.

He married Rebecca Lydia (born Atwater) Murdock on October of 1799 and they had 10 children. He was licensed as a Congregational minister in January, 1801. In February, 1802, he received a call to settle in Princeton County Massachusetts, and was ordained there. In 1815, he resigned his pastoral charge and was appointed Professor of the learned languages in the University of Vermont. He moved to Burlington, Vermont where he was Professor of the learned languages and Professor of Mathematics and Natural Philosophy. In 1818, he became Professor of Languages. In the spring of 1819, being appointed Brown Professor of Sacred Rhetoric and Ecclesiastical History in the Theological Seminary at Andover, he left Vermont and returned to Massachusetts.

In the autumn of that year, Harvard University conferred on him the honorary degree of S.T.D.(Doctor of Sacred Theology) Difficulties soon afterwards arose between him and the other Professors, respecting his course of duties in the Seminary which continued several years, until in 1828 when he decided to leave the Institution. He moved to New Haven in 1829, where he continued to reside. He retired from public life, and devoted himself to private studies and especially to Ecclesiastical History.

For a few years he preached and delivered lectures in different places, but of late seldom appeared as a public speaker. He was made an honorary member of the New York Historical Society several. He was also Vice President, and recently President, of the Connecticut Academy of Arts and Sciences. He served as Vice President of the Philological Society of Connecticut, of which he was one of the original founders. He was also one of the founders and corporate members of the American Oriental Society, and a regular contributor to its learned Journal. This was an Association of Oriental Scholars, so select and exclusive that it had no honorary members in America, only three in England, a few on the continent of Europe, and a few in Asia.

In the Autumn of 1855, Dr. Murdock went to Columbus, Mississippi, where he spent a delightful winter in the family of his son, visiting various portions of the Southern country, and anticipating a return to New Haven in the ensuing Spring, his strength gave way, and he died on August 10, 1856.

Resources: Download the Editions and Reprints of The Murdock New Testament: here.

George M. Lamsa (August 5, 1892 - September 22, 1975) was born in a small village called Marbishu (Mar Behishu) which was located in the Kurdish mountains at the corner of southeast Turkey. His village was a few miles from the Iran and Iraq borders. He was the son of Jando and Sarah. He had two sisters. The family last name was not known.

His elementary education was at a small Presbyterian School and his secondary and post secondary education was at the Archbishop of Canterbury’s Mission to Assyrian Christians school. He distinguished himself through his excellent work and good grades and as a result was able to get a job as a teacher. After a few years of teaching, he moved to a new school opened in Van (Turkey). He had to move around a number of times in response to the persecution of the Armenians which led up to the impeding collapse of the Ottoman empire and the start of World War One.

Finally in 1913, he had to flee local authorities in Istanbul who were sent to the University where he was employed. He traveled to Bulgaria and Italy and finally ended up Buenos Aires, Argentina. In 1917, he earned enough money to emigrated to New York City. In 1919, he earned a scholarship to the Episcopal Theological Seminary in Virginia, where he studied for three years.

He then moved to Washington D.C., where, he assisted the Archbishop of Canterbury raise funds for the reconstruction of war-damaged schools in Turkey. In 1923, Lamsa was able to print his first book "The Secret of the Near East" this helped to promote his work with the Archbishop of Canterbury's mission in Turkey. His second book, "The Oldest Christian People" which was co-authored by William Chauncey Emhardt was published in 1926. William Chauncey Emhardt was the head of the Missions Committee of the Episcopal Church in the United States. Lamsa traveled and spoke promoting the cause of the Christians in the East through the Association Assyrian St. Ephram which was a group organized to raise money for the Christian refugees as a result of World War One.

It was supported by the American Protestant Episcopal Church. Through various private donors, between 1927 and 1930, he was able to publish his third book, entitled "My Neighbor Jesus". Shortly thereafter, he started to translate "The Four Gospels According to the Eastern Version". He finished and published the four Gospels in 1933. It was published by the A.J Holman Publishing Company which was located in Philadelphia.

Lamsa continued to lecture at various churches. Through these lectures, he gained a number of benefactors that supported him regularly throughout his publishing, writing and translation career. He finished and published the entire New Testament in 1940. In the autumn of 1940, he began to translation the Old Testament. Lamsa was a student at Dropsie College of Hebrew and Cognate Learning between 1944-1945 but never received a degree. In 1957, when the entire Bible was published, his lecturing schedule greatly increased. He soon was spending much of his time giving radio interviews, speaking and traveling.

Lamsa believed in the ecumenical Christian Church and accepted any and all invitations to speak. He also tried to promote greater cooperation and understanding between Christians, Jews and Moslems. He died on September 22, 1975.

Come back for updates, these prices may change!

AramaicBibleTools.com offers a growing community with focuses on archeology biblical history and the Syriac Parallel New Testament. Follow us on Facebook!

Including three authors in parallel format with the entire new testament. With photoshoped Syriac footnotes for precise detail.

The authors footnotes and Syriac caligraphy that highlight each authors personality and style of translation. 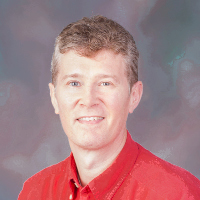 Steve's early years (age 3-7) were spent on the Mission field of Zaire, Africa. His father was a Medical Missionary doctor and Surgeon. Read More...

Steve's early years (age 3-7) were spent on the Mission field of Zaire, Africa (now called the Democratic Republic of Congo, DRC). His father was a Medical Missionary doctor and Surgeon.

Upon returning to the United States, his family settled in Harrisburg, Pennsylvania. His early intellectual development and Biblical learning was sharpened on a strict adherence to the Bible. He was raised in a strong Christian home that was dedicated to honoring God in everything. Steve has his Bachelors degree in theology from Cairn University (Philadelphia Biblical University).

Currently Steve Ulrich is married and has three children. He lives in Hershey, Pennsylvania. 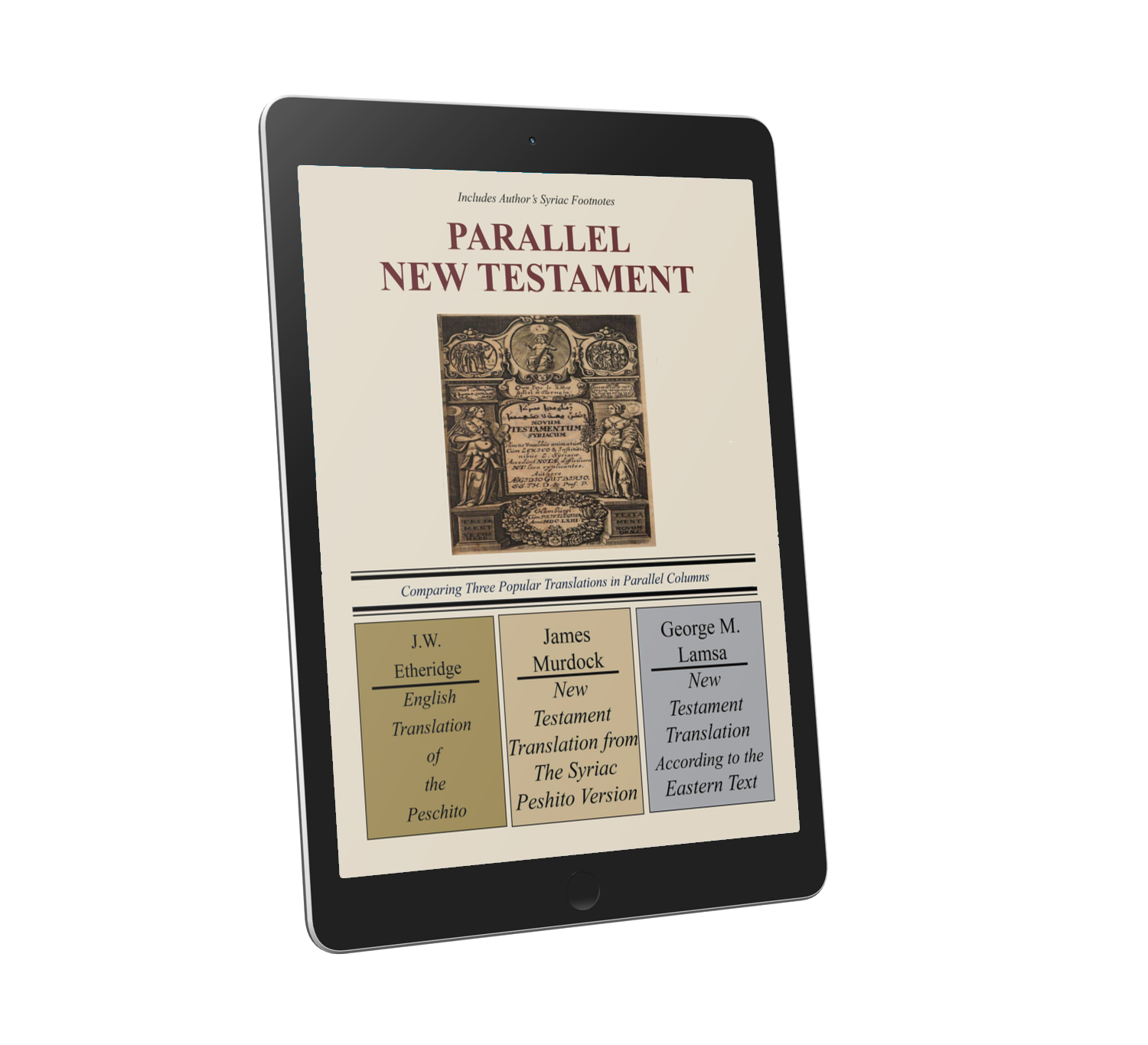 Download 2nd Peter in PDF format now and experience all the features included in the full Parallel New Testament.